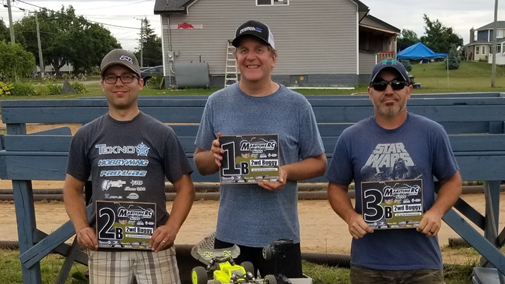 Saturday August 17 was the Maritime Series finale. This was race no.4 of a best of 3 race series. It took place in Cap Pele RC Revolution Raceway.

For this race, it was decided that we would run it in the opposite direction we are used to.

With 90 entries, this was the biggest race of the series. For this reason, we had to settle for 2 qualifiers and then the mains.

In 2wd buggy, i had some steering issues on this low traction dusty track and made a few changes to my setup and got it ready for the B main. I was starting 2nd on the grid. I had a slow start falling back to 3rd but i was able to take back the 2nd spot where I finished, getting the final bump spot to the A main. In the A main, starting last on the grid, i was able to climb to 7 place but a few mistakes sent me back to last. (2wd buggy equipped with Pro-Line 4-rib in front, and Hole Shot M4 in rear) 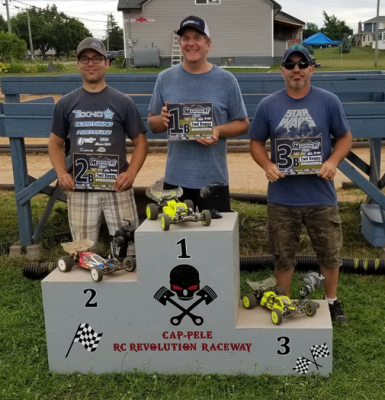 In 2wd Stadium, which I borrowed for this race, i was able to qualify 2nd. Since it wasn’t mine, i drove it with caution not to break anything and this proved to be the right thing to do. Slow is fast! I was really consistent in the A main and took 2nd. (Stadium equipped with Pro-line Calibers in rear and Hole Shot in front) 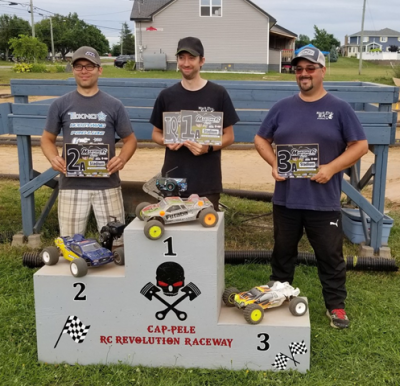 Now to 8th scale buggy. I needed a TQ and a win to get the top honors of the series, and I knew it wouldn’t be an easy task! I fought as hard as I could but ended up qualifying 6th. In the A main, I raced a flawless run, climbing positions and taking advantage of others mistakes. I finally ran out of time and settled for the last step on the podium, giving me the 2nd place overall in the Series!  (1/8 buggy equipped with Pro-Line Buck Shot M4 front & rear) 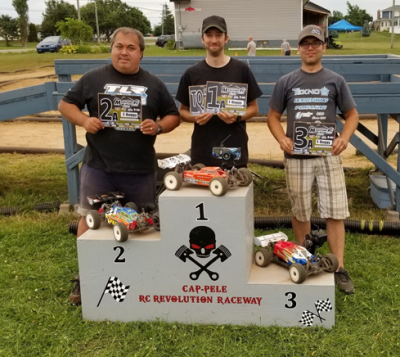 Finally, in the 8th scale Truggy class, the overall 1st place in the Series was already secured but i was in good standing for the 2nd place overall. I qualified 3rd after the 2 qualifier rounds. In the main, right after the start tone, the top 3 were able to break away from the remainder of the pack, following the 2nd place really closely With only a few seconds to go, the leader made a mistake and flipped! I was able to pass him while he was getting marshalled and i lead the race for a lap until i got hit head on after another racer, that was a few laps behind, missed a landing in the opposite lane, making him fall into my lane and getting stuck into my wing. While waiting for the marshall to untangle us, i lost the pole position and i heard the end tone. I had a small chance to catch him back but not enough time! I finished 2nd giving me the 2nd overall place in the Series. (Truggy equipped with Pro-Line Hole Shot M4 front & rear) 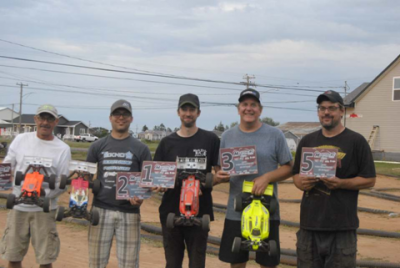