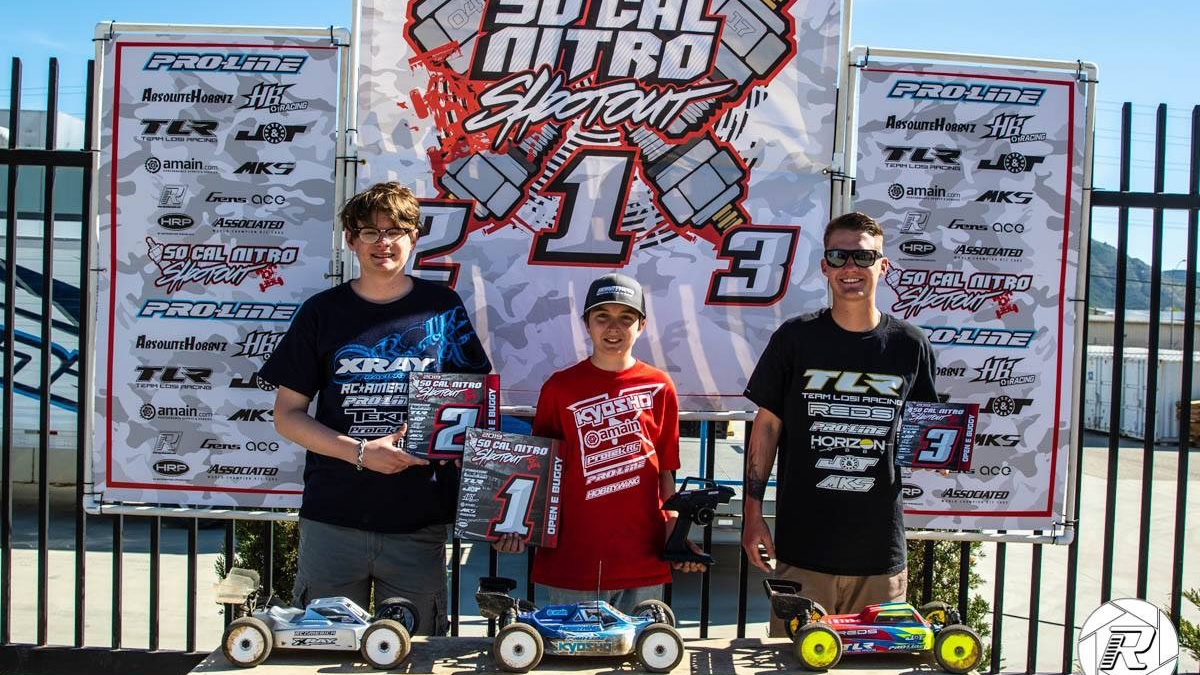 This past weekend was the 3rd Annual SoCal Nitro Shootout at Pro-Line’s test track. 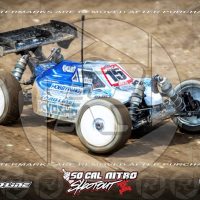 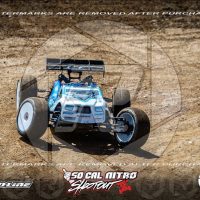 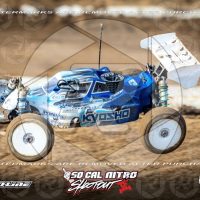 The race had 185 entries and 10,760 total race laps. The weekend for me was up and down, but in the end really fun. With the format at this race its different from anything else. There was three rounds of qualifying and all three counted toward the mains. Qualifying was all heads up racing with a random starting position each round. Before each qualifier you would take a ball out of a bucket. For example if there was ten people in a race and you picked number 10 you would go up on the drivers stand first but start last. Now onto racing, in practice I had really good speed and was feeling confident with my cars into qualifying. I didn’t have the best starting position in all my qualifiers but was still able to have fast runs. My first round of qualifying in e-buggy was a little rough because I had one practice with my e-buggy before qualifying. I still drove my best and was able to get a 5th for the round. Round 2 I had a really good start and was in the lead when my car broke. It really sucked because I was on the fastest run of the weekend. Checking my car completely over for round 3 I set TQ for the round and this put me 10th overall in e-buggy. The racing format had 8 people in the main and 2 bumped from the b main. The b main I started 2nd and made the move to first on the first lap. Then went on to lead the b main from tone to tone. The A-main I was starting 9th and I had my work cut out for me to catch the front. The first lap I was in 6th then a couple laps later I was in 4th. A couple minutes later I was battling with first and made the pass. Then went on from there to take the win in open e-buggy. My next class was open nitro truggy. In practice my truck was feeling really good for qualifying. The first qualifier of truck I started in the middle of the pack but made my way up to first within a couple of laps. I continued to keep a fast run to TQ the first round of open nitro truggy. In round 2 I had the same run as the first round. Round three was different. I had a really good start but I crashed and was able to get up to a 3rd for the round. After all three round of qualifying I would start first in the open nitro truggy a main. The track before the main was getting really dry and bumpy. I then made the choice to run Pro-Line S3 Buck Shots with the rib to the inside. This tire choice made my truck really easy to drive and fast. The start of the main I made a small mistake and that let 2nd and 3rd by. I followed 1st and 2nd until they made a mistake but that didn’t happen until a little later but I didn’t look back to win the open nitro truggy class at the SoCal Nitro Shootout. The last class that I raced was pro nitro buggy. The first qualifier I had a decent run to get a 2nd overall for the first round. I fixed my mistakes by the second round but was having something going on with my car but managed a 2nd for the round. For the third round I had thought I had fixed the problem, but I didn’t. So after having the issues in round 2 and 3 I qualified 2nd overall. After talking everything over with everyone we replaced a lot of parts. So going into the main I thought that the problem with my car was fixed but it wasn’t. So the first lap of the main there was a rough part of a jump that I didn’t know was there and broke my car from coming up short on a jump. This ended my weekend right there. From the entire event I qualified 10th in e-buggy, 2nd in pro nitro buggy, and 1st in open nitro truggy. Then after mains I finished 11th in pro nitro buggy and won e-buggy and open nitro truggy. Overall not a bad weekend can’t thank Victor, Eddie, and Daniel for putting this fun race on. Also thank you to Mason Eppley, Zach Rodgers, and Kevin Palmer for all your help this past weekend. Now time to get ready for Silver State.#Kyosho #Pro-Line #Amain.com #Protekrc #Hobbywing #VpRacing #Sanwa #Avid #Ogio #Stickit1 #Hooked 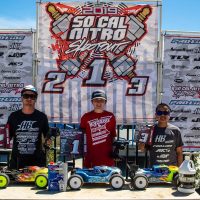 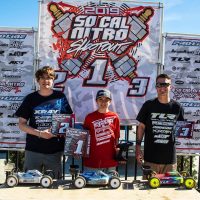