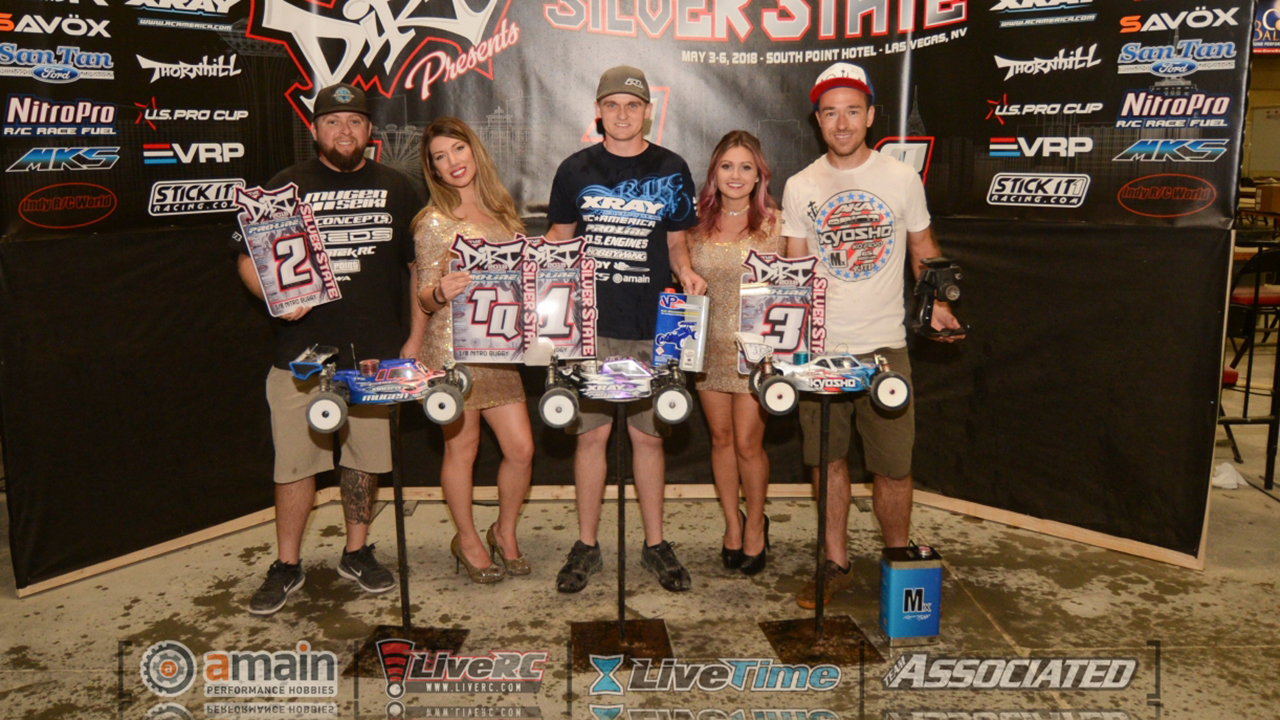 This past weekend was the first ever indoor Silver State Race held at the Southpoint Hotel in Las Vegas, NV. We knew going into this race there would be a lot of unknown challenges, I was excited to see how the weekend would play out. At the start of the weekend the track was smooth and packed but with the feel of the dirt there was a lot of speculation as to what it would do as the weekend progressed. 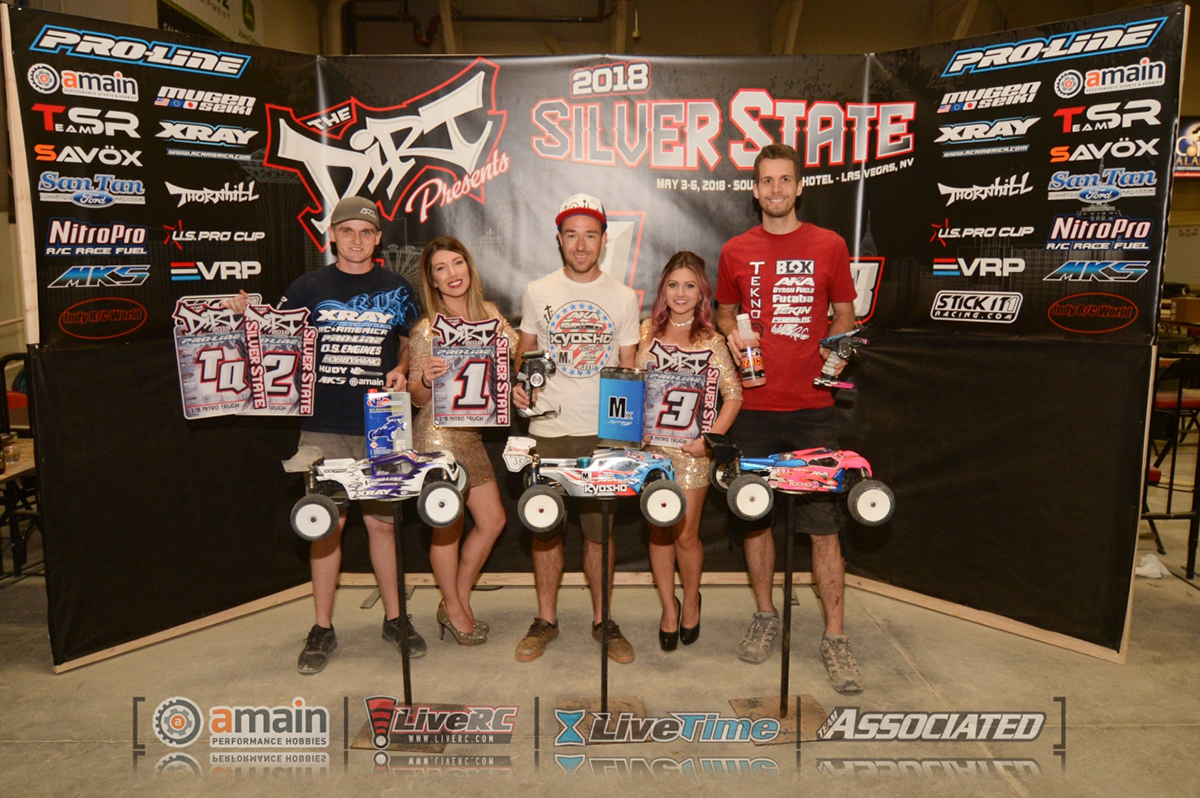 They watered the track intermittently which created a lot of changes in the traction, when the track was damp the grip was very low and as it dried out the grip level went up considerably. I used the 2 practice rounds for each class that also counted as seeding rounds to test tire compounds, tread patterns and setup. I really wasn’t concerned about top seeding practice, I was more concerned with trying figure out the setup and tires. The entire Xray/RC America team worked hard to get a baseline setup and tire selection for the start of qualifying on Friday. On the Thursday practice day the track got pretty blown out but they did some repairs for the start of Friday qualifying.

In Pro Truck, I was able to take the overall TQ with a 1st and a 2nd, Tanner Stees qualified 2nd , Cj Jelin qualified 4th and Mark Sousa qualified 12th which put 4 Xray trucks in the Main.
In Pro E-Buggy , I qualified 2nd , Tanner qualifying 9th and Cj qualifying 5th. In Pro Nitro Buggy, I was also able to take the overall TQ, by winning the tie breaker with Ryan Maifield by 3/10 of a second in combined laps and time. Tanner qualified 5th, Cj 7th and Mark 10th which once again put 4 Xray cars in the Main.
We spent the afternoon on Saturday rebuilding our cars for the Mains on Sunday, we were wanting to try a few things in the A Main warmups as it seemed the grip was getting higher and higher but Sunday morning it was announced that there would be no A Main warmups, which left us scrambling to do some bench tuning and figure out tires and compounds without actually being able to get on the track.

The truck Main was up first, as soon as I hit the track before the start of the Main I knew this race would be difficult, my truck was very aggressive and hard to drive, the track had considerably more grip than the last time I had been on it. The ruts and holes had become very sharp and made the truck feel very aggressive. For the first 2/3 of the race I battled back and forth with Jared and Ryan Lutz, I made a few mistakes and allowed Jared to get ahead of me, I had to push hard to try and catch up which only caused more mistakes and I ended up finishing 2nd.

For E-Buggy we took what we learned from the truggy Main, I made a couple of changes on the E-Buggy and chose a different tire, in my 1 lap warm up before the race my car felt really good and I was excited to start the race. On the first lap in the triple after the 3rd corner I was hit from behind in the air which would throw my car completely upside down breaking my shock stand off and this ended my E-Buggy Main.

The Pro Nitro Buggy Main was the last Main of the day, I went into the race knowing my car and all my equipment was good, but knowing how blown out the track was, I knew it would be super challenging to try and get around without crashing. In the beginning of the race, Maifield, Tebo and myself pulled away from the pack battling with numerous lead changes, my car felt really good but it seemed that there was a fine line that if you pushed too hard the track would bite you and if you drove too conservatively the person in front would get away or the person behind would catch you. Towards the end of the race Jared for some reason dropped off a bit and the battle continued with Maifield and myself, the gap between us would go anywhere from half a second up to 6 seconds. With about 2.5-minutes to go I was right on the bumper of Maifield when he cased the back left double and ended up upside down, I would accidentally run into him when he crashed, but I was able to get around him and take the lead. He would make a few more small mistakes which would allow me to extend the gap and I was able to take the win by 3.2 seconds.

Thanks to my family for always being there for me and supporting me, and most importantly I want to thank my my Lord and Saviour Jesus Christ, I wouldn’t be here without him.