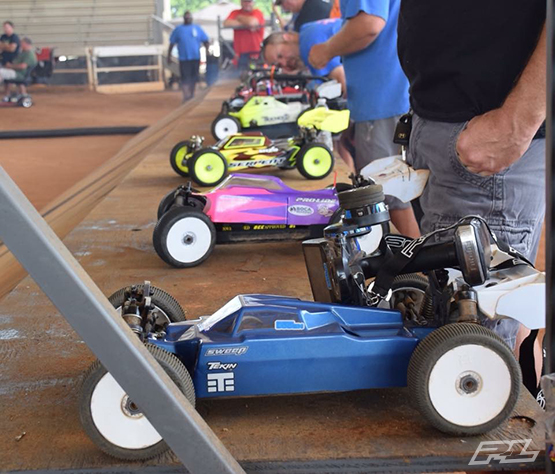 We always look forward to The Wicked Weekend. It is our favorite race to attend. We started our trip around 11:30 AM Tuesday morning. We drove about 9 hours and stopped at a rest area for the night. Waking up at 4:00 AM the next morning we only had a little over 2 more hours to go. Wednesday would be our day to set up camp, stock up on supplies and get a little relaxation in before the long days began. 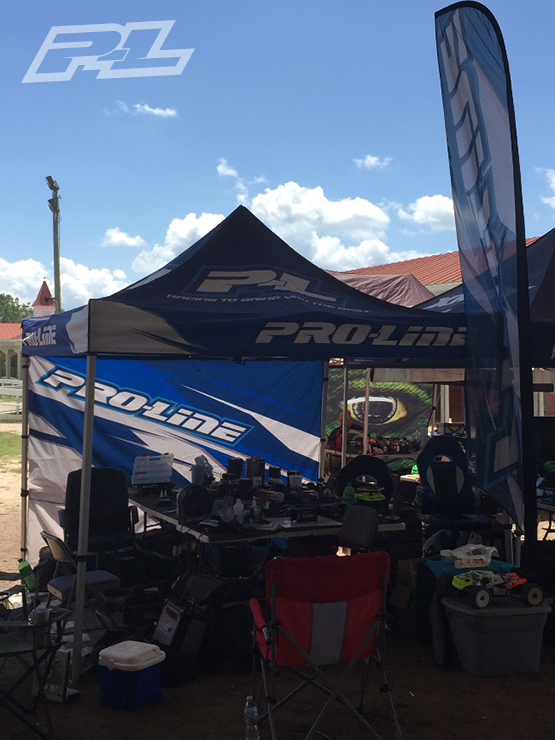 Practice started at 7:00 AM sharp Thursday morning. Right off after my first time on the track I needed to go back to the pits to put my dog bone back in the out-drive. Second time out on the track I didn’t even make it down the straight when the out-drive snapped in half. Back at the pits I had to take apart the diff to change it out. Third time out on track I had what I thought was a good run, when back at the pits I noticed my front wheels would not move, which meant my steering servo was shot and another one had to be put in. Thinking my luck could not get any worse……..well it did. On my last round of buggy practice, I ended up flipping on the straight when the announcer was not there to call it out. I yelled as loud as I could, but nobody could hear me over the nitro cars. SLAM! Not a good way to end my practice with a bent center axle, bent shock tower, broken battery strap and two gouges in my battery pack. Trying to look on the bright side of a very expensive day, after replacing everything I now have a brand-new buggy. 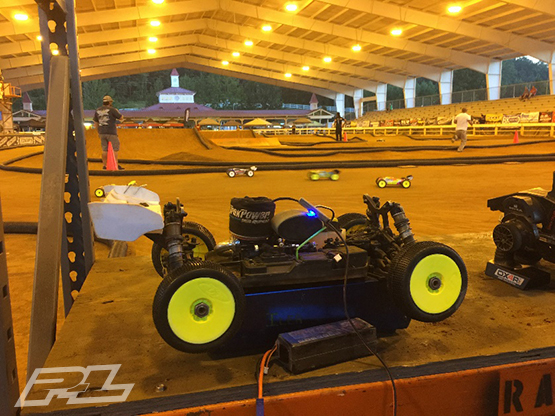 I was struggling a lot with my nitro Truggy during practice and was making stupid mistakes. I needed to drive within myself and not push it so hard. Once I started doing that I had my best run at the end of the day.

The track started off slick, but we continued to run laps just to learn the layout. David had some bad luck also and broke his steering servo on his e-buggy. He also popped out his rear center axle on his nitro buggy. Even with all the broken parts we both had a BLAST. Practice day is always super fun. 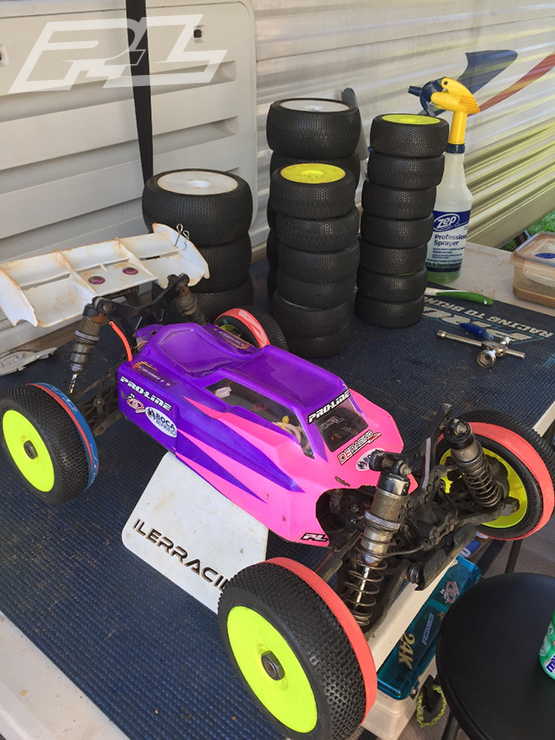 Friday morning was very laid back and relaxing as there would be one 5-minute round of practice starting at noon, then followed by one round of qualifying. With a pretty decent first round of qualifying for both of us we headed to bed as we needed to be up early in the morning for round 2.

Saturday came way quicker then we wanted it too, but we were ready for round 2 and 3 of qualifying. We both did pretty well during round 2 and 3. David hasn’t run Nitro much so he had a few mistakes as he tried to adapt to how his Nitro buggy handled compared to his electric one. I also struggled some with my Nitro Truggy during round 2, but improved in round 3. Overall, we both did good and were just waiting for the mains to be posted to see where we would be starting. 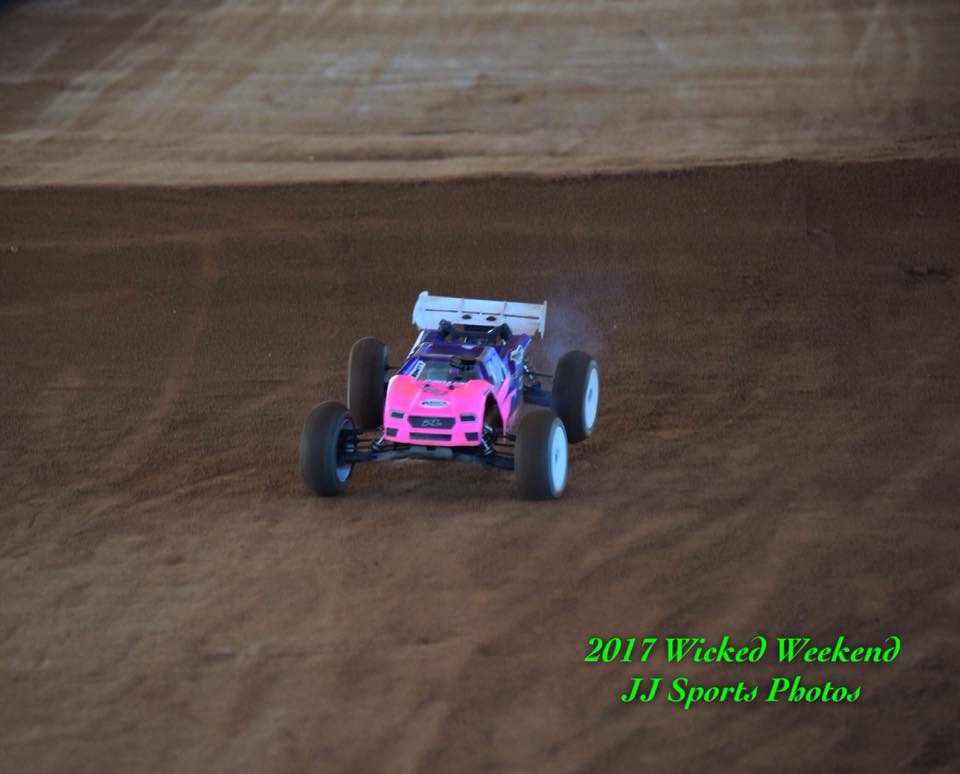 The mains were posted and I made the B-main in both 40+ E-buggy and Sportsman Nitro Truggy. I was happy with making the B-main in 40+ since it is an open class and a lot of experienced drivers will enter it.

Sunday would be another early morning as the mains began at 6:00AM. David’s Nitro Buggy B-main would be up first and I would be pitting for him. He was having a good run when I brought him in for fuel. I was using the fuel gun and ended up spilling fuel all over everything. I thought when using the fuel gun, it would stop when the tank was full just like when you fill up a regular car and the pump stops once full. NOT! Half way through the 20-minute main his rear center axle fell out and he would not be able to finish. It was disappointing as I really think he would have had a good chance at bumping up to the A-main. 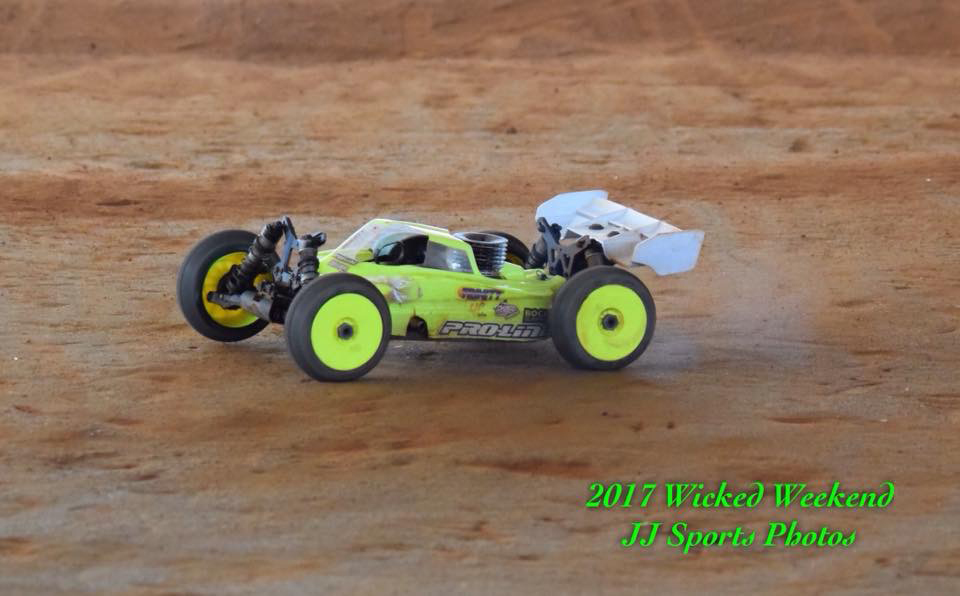 My Nitro Truggy B-main was next. I did awesome on my practice laps before we started and was feeling confident. After the first few laps when the main started I felt like I was losing power where I could not make any of the jumps. David pulled me into the pits and my truggy was sounding horrible. We didn’t know what was wrong and decided to stop racing. Back at our camper he changed out my glow plug and that seemed to have done the trick even though he had just changed it before the main. Since there was still time left in the 20-minute main I ran back up the drivers stand to finish the race. I had lost approximately 7 minutes, but was able to gain some positions to place 12th out of 16. 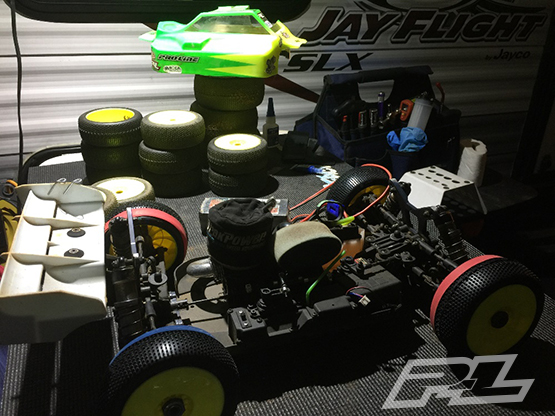 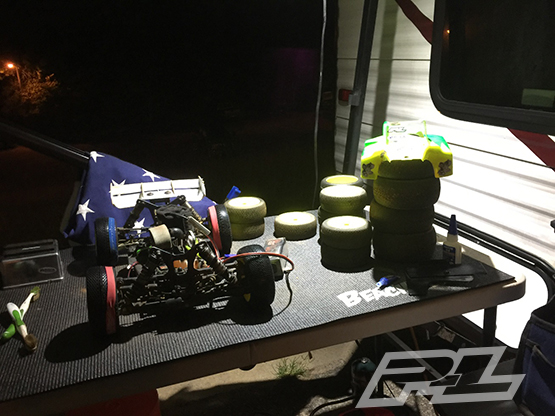 The triple A-mains for 40+ E-buggy was up. David had struggled with the starts and had to fight to work his way back up through the pack each time. A-1 he finished 12th, A-2 8th and A-3 6th. After taking the best 2 out of 3 he finished 8th overall. He was disappointed with his results as he felt he could have been in the top 5, but I’m proud of him for making the A-main in a stacked class.

Throughout the weekend we got the chance to watch the Pro drivers race. It was amazing how they could run the same lines on every single lap. We were routing for #Ryan Lutz to win as he is our favorite driver. One of the reasons why we like him so much is he is always willing to help others and you never see him yell or curse while on the drivers stand. Ryan is also one of the first drivers out to the track to turn marshal. He treats everyone the same and will turn marshal a sportsman’s buggy just as fast as if it was a pro’s. He is a true professional and he makes racing fun. It was unfortunate on the other hand to see another professional driver think it was a waste of their time and were too good to turn marshal. He had to be called out several times to the track as the drivers for the next race waited on the drivers stand. 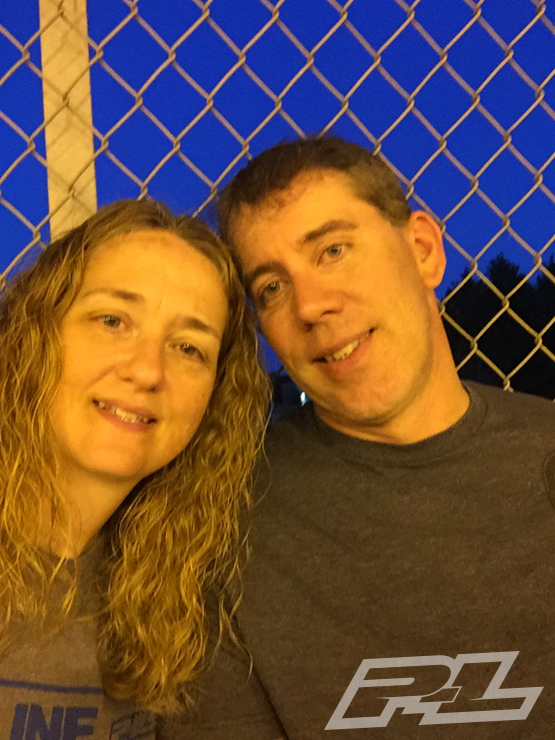 We couldn’t believe it was all over as we woke up Monday morning at 4:00AM to start our 11-hour drive home. We had a fun time and liked the new 4-day event as it made it a little bit less hectic. We would like to thank #Christina White for cooking for us all weekend. The food was yummy!

A special thank you to our sponsors #Trinity, #Proline, #BocaBearing and #DERacing