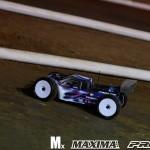 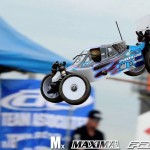 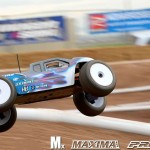 Well the 2016 Dirt Nitro Challenge is in the books and this years the weather was actually quite warm and there was no rain either.

With this year’s race be limited to a certain amount of entrees it made for a much nicer race than years past as racing was able to be finished at a somewhat decent hour every night.  The layout of the Track was a lot better than what I thought it was going to be just because it was so fast.

“Throughout the whole day I switched between the X3 Hole Shots and the new Switchblade Tire in X3 because it has a side designed to help go through routes easier.”

When I first showed up on the setup day I really though the track was simple and it really was but the fact that it was just so fast was a lot of fun for me.  Practice day was pretty much all about getting used to the track with my cars and trying to figure out what tires to run but overall the day was really good.  In the second round of practice which was seeding I was able to get three good laps in both Truggy and Nitro Buggy which put me 4th in Truggy and 5th in Buggy.

As for E-Buggy I didn’t really get three really clean laps in like nitro but I was able to make it into the B-qualifier group.  Thursday was qualifying for both Truggy and electric buggy.  At this point the track was still in fairly good shape but at the end of the day the track was pretty rough from all the cars running on it and the track not really being packed in before the race.  In all three rounds of qualifying my Truggy was really good only making some minor changes to rear link.

The car was pretty good with X3 Compound just too many mistakes although the third round was much better and I believe I only had one mistake the whole run.  Friday was buggy qualifying the biggest question starting out was what Tires to run.  With all the running that happened the day before the track was pretty tore up and was only going to progressively get worse as the day went on so you wanted a tire that still gave forward grip as much as possible but didn’t catch the routes too bad either.

Throughout the whole day I switched between the X3 Hole Shots and the new Switchblade Tire in X3 because it has a side designed to help go through routes easier.

Overall I really liked both tires during my runs and I was able to get in a good first round but had a few crashes in the other two rounds that set me back a ways.  My car was really good I ran pretty much my standard setup for the track other than changing some shock stuff throughout the day and I felt good with it just some driver errors throughout the runs.  After qualifying was finished I was able to qualify 7th in the main for nitro buggy which is big improvement from last year so I was pretty happy about that.  As for Truggy I qualified 6th in A-main which I was extremely happy with and E-buggy I made the B as well.  AS for Saturday not much went on until later in the day when I ran the E-buggy main which was 10 min in length.  I started about mid pack and was up somewhat towards the front when another racer decided to drag race me to the triple and ended up colliding in the air and I got the worst of it putting me way back to almost last.  After that it was really hard to come back and my car lipo’d on the last lap but my car was really good on X3 Hole Shots super easy to drive through the routes.  As for Truggy there was a warm-up before the mains and I spent that testing the suppressor tire which was really good as well in the X3 compound.

Since the Main was 45-minutes long I a bit scared for tire wear so went with X3 Blockades in the Main and man my truck was really good.  At the start I was trailing 5th place just waiting for a mistake when I came into the middle section before the big triple and got hit off the track putting me way down in the pack.  Unfortunately after that something never felt right in my truck again as it didn’t really turn left as much as it did before and as the race went on I ended up finishing 13th.  That’s still one spot better then where I finished last year which is an improvement but it was really unfortunate as my whole setup from my truck to engine to tires were all perfect.  As for buggy on Sunday I ran the 30 minute B-Main starting from 7th and off the start stayed in pretty much the same spot until about the 5 minute mark when I started having tire issues.  This was really unfortunate as well I thought my car was really good with X3 Suppressors and I had a good chance if I got to the front to be able to bump.  Overall the weekend was still full of fun times and some good racing as well.

Thanks to all my sponsors that helped me on and off the track my Hot Bodies vehicles, Pro-Line Racing, and O.S. Engines were all great the entire weekend.

Also thanks to Red RC for the cool pictures.