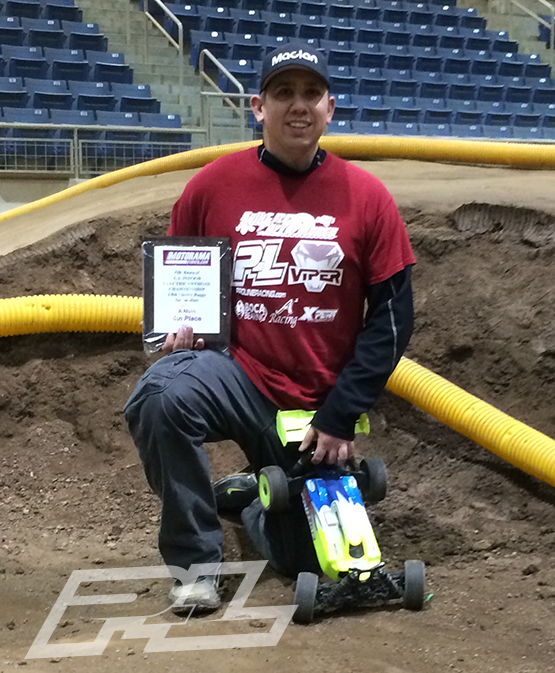 My wife and I headed north to Harrisburg, Pennsylvania for the 2016 Motorama. We had heard a lot about Motorama and it being a can’t miss event. I participated in 4WD SCT Expert and E-Buggy Intermediate divisions on the 1:8 track.

The race directors did a fantastic job managing such a large race but like any big event practice was very limited.

I found Pro-Line M3 Stunners and M3 Tazers provided the best traction for my vehicles and I stuck with those Tires throughout the weekend.

I only had 10-minutes of practice on each vehicle so I mainly focused on learning the track and working on improving my lines. I just received the brand new Maclan MR4 motor for my 4WD SCT the week prior to Motorama, I was impressed with the power of the 4150kv motor which allowed my truck to fly down the straightaways.

Day one definitely ended on a high note as I was sitting in 3rd in E-Buggy and 6th in 4WD SCT after the first round of qualifying. Day two proved to be a bit of a struggle as I attempted to secure at least one more top ten finish and punch my ticket into the A-Mains. The 4WD SCT times kept improving and in an effort to keep up, I pushed my truck a little too hard at times which resulted in an increase in my overall times and a drop in the standings. I kept things smooth with my E-Buggy but still dropped a little by the end of the qualifiers. After the qualifying points were sorted out, I found myself sitting 12th overall out of 37 racers in 4wd SCT and 7th overall out of 64 racers in E-Buggy. I qualified straight into the E-Buggy (Int.) Triple A-Mains and into the double B-Mains for short course with a chance at a bump.

The third and final day of Motorama began with the first B-Main. I pieced together a solid run but finished 4th and missed the bump by two spots. In the second B-Main, I lead a majority of the race before a hard crash at the end of the straightaway with the second place car dropped me several spots. I once again finished 4th which put me 15th overall in the 4wd division.

The E-Buggy division provided a lot of thrills, in both A1 and A2 races bad first laps dropped me to the very back of the field. I was able to work my way up the grid and raced to 4th and 6th place finishes. In the final A-Main, I was able to keep everything clean on the first lap and stayed at the front half of the pack. I crossed the finish line in 3rd place to end my first Motorama experience. My combined points put me in 4th overall, I am extremely pleased with the results since I only have 12 E-Buggy races worth of experience and I am definitely still learning.

My wife and I thoroughly enjoyed Motorama and will be returning in 2017. The RC races were enhanced by the other activities at Motorama including an auto show featuring a couple Lamborghinis, a McLaren along with several classic cars, Motocross Racing and even a beauty pageant.

I would like to sincerely thank the companies I am fortunate enough to represent, Pro-Line Racing, Maclan Racing, Boca Bearings, Xpert Servos, Bullit R/C Hobby Shop and Boom R/C Graphics.