COWRC.COM TRIPLE CROWN SERIES ROUND #1, Sponsored by Pro-Line Racing, is IN THE BOOKS! June 19th, 2015 (Waupun, WI) – It was a foggy, wet morning last Sunday, June 14th, but Attitude RC Raceway was not going to let Mother Nature win this battle again. As the fog rolled through the raceway, vehicles started to file into the pit area, in anticipation of the COWRC.COM Short Course Late Model Triple Crown Series, Round #1. The track was wet and soft, cancelling practice for the morning, which pushed the schedule back hoping the track would soon come in. After the fog lifted, a few peaks of the sun, and help with some hot laps, it was time to start the single car qualifying session for 24 SC Late Models! Paul Peterson, out of Fond du Lac, WI, set fast time for qualifying, putting him on the pole for Heat #1. For the Triple Crown Series, there were two sets of heat races. The heat races were based off of a points system to seat everyone into the mains based off of points in the heat races. The tie breakers in the points then fell back to the driver’s single lap qualifying time, making qualifying even more important. Once the heat races were all in the books, Brian Laurent was awarded the pole position for the 100 lap A-Main. There is always a twist to the start of the Triple Crown A-Main as the pole sitter has to roll a dice to figure out the invert of the starting order. Brian had honors to do this, but things did not go in his favor as he rolled a 6 causing him to start 3rd row outside in the 6th position and bringing Waupun’s Dale Marshal and Fond du Lac’s Marcus Mcauly to the front row starting positions. 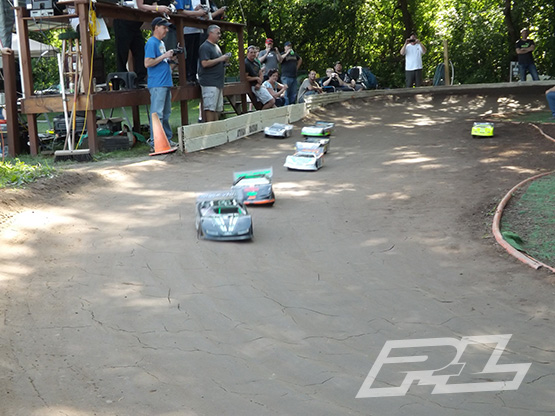 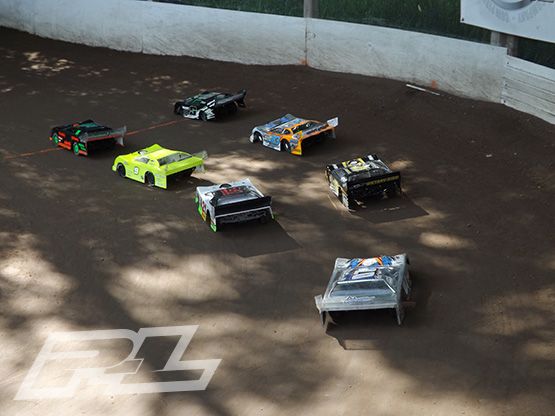 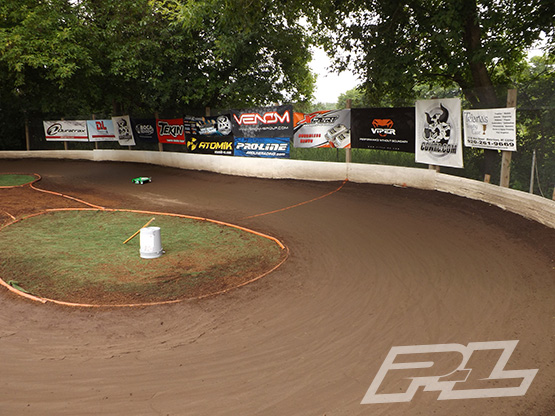 Once the green flag flew for the 100 lap A-Main, Marcus Mcauly took advantage of his front row starting spot, and would pull out of his outside spot to take the lead early on. Brian Laurent had his work cut out for him from his sixth place starting spot but didn’t waste any time as was up to 3rd by lap #5 with Don Dechamps making quick moves as well to put himself in second behind Marcus by lap #3 from his seventh place starting spot! It was Marcus, Don, and Brian, 1,2,3 until lap 22 when Dana Zenil decided it was time to start making moves and made his way into second place, Brian would follow Dana through pushing Don Dechamps back to 4th. It was then Marcus still leading, Dana and Brian, with Don, Paul Peterson, Dale Marshal, and Mike Mcevoy rounding out the field after Dennis Deibert was unable to make the start due to mechanical issues. The first car to fall out of the race was Mike Mcevoy on lap #48 when he had to retire his #9 machine for the rest of the race. Half way through at lap #50, Marcus Mcauly was still leading the pack out front with the hard charging Dana Zenil, and Brian Laurent starting to close the gap. By lap 60 Dana and Brian caught the back bumper of Marcus Mcauly putting the pressure on him, knowing they only have about 40 laps left. On lap 61 Dana got into Marcus going into corner #3 making the pass to take over the lead, and once again Brian would follow right behind putting him in 2nd and Marcus falling back to 3rd after leading the first 60 laps. Dana’s lead would be short lived, as Brian put the pass on Dana in less than a lap and would become the 3rd different leader, on lap 62. It was then the race to the “checkers” as Brian and Dana pulled a couple seconds on Marcus. Dana did not let Brian pull away but could not make the pass and Brian Laurent would claim the Round #1 win, with Dana 2nd just .6 seconds back and Marcus finishing 3rd just 1 lap down. After making a hard charge to the front, Don Dechamps would settle for 4th, your pole sitter, Dale Marshall would round out the top 5. After and early race incident, the 2014 Triple Crown Champion could not rally back and would finish 6th and Mike Mcevoy finishing 7th after suffering mechanical issues. 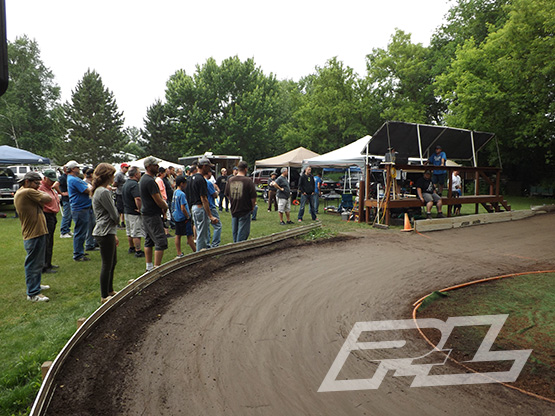 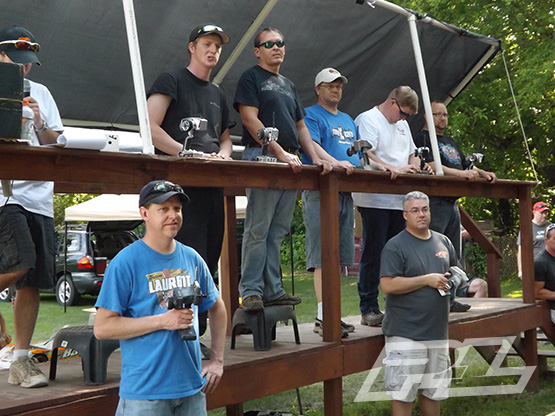 The COWRC.COM Triple Crown Series will now take a rest and be back on Sunday, August 2nd for round #2. We look forward to see if Brian can stay out front or someone else will come to the challenge!

We would like to thank all of our Sponsors that make this 3 race series such a success! First of all we need to thank our series sponsor, Cowrc.com as they have become our primary sponsor in 2014 and were kind enough to return in 2015! Other sponsors that we owe a huge thanks to for returning to the Triple Crown series in 2015, are: Venom RC, Hobbico, Dirtondirt.com, Tekin, Viper, Boca Bearings, XPert and Pro-Line! We hope everyone can support these companies, as they were kind enough to help us out in 2014 and 2015! We appreciate all the help and support from these great people!

Attitude RC Raceway also had 5 other support classes racing with the COWRC.COM Triple Crown Series. There was great racing in all classes and this included the Amatuer Class A-Main as Brady Streblow and Kooper Raley putting on a show for everyone in their 4-min A-Main. After a hard fought battle and many lead changes, Brady would finish just 3 seconds in front of Kooper for his first A-Main win. Kooper was second with James Raabe finishing 3rd in just his 2nd appearance. (Quintin Taylor 4th, Riley Morrow, 5th and Bob Taylor 6th.

In the Street Stock class, Kurt Raley would claim his first TQ in 2015 and would hold off the #99 of Jack Zenil in the A-main to take his 1st A-Main win as well in 2015. Bryon Barbeau would have his best finish in 2015, finishing 3rd, Nate Sumner 4th, Chad Gean 5th, and Paul Demler 6th.

The Sportsman Class had their biggest car count in 2015, causing a few new faces to race their way into the A-main. Early on in the A-Main, the race was led by Corey Streblow but the 2013 Champion, Dale Marshall put the pressure on and would make the pass for the A-Main win. Corey finished 2nd with AJ Beske coming off of his best day of racing finishing 3rd! (Dennis Deibert 4th, Chad Gean, 5th, Dakota Krupp, 5th, Paul Demler 7th and Dennis Lee 8th)

The Open 4×4 A-Main was another fast paced race with Paul Peterson leading from lap 1 and holding off the rest of the field to take his 2nd A-Main win in 2015. Paul Demler ran a great race but couldn’t find enough speed to pass Paul and would finish 2nd. Dale Marshall rounded out the podium in 3rd. (Randy Yerke 4th, Wayne Peterson, 5th and Carl Fritts, 6th)

The SC Modified Class also had their biggest car count in 2015 with 22 cars registering in! This class was once again the closest class of the day. Brian Laurent was TQ and would continue his great success in this class to take home his 3rd A-Main win in 2015. Kurt Raley and Dana Zenil would battle it out for the 2nd spot all race long, but Kurt could not recover from his roll over on lap 10, and Dana would finish 2nd, 5-seconds behind Brian and Kurt finished 3rd about .6-seconds behind Dana. (Paul Peterson 4th, Carl Fritts, 5th, Zach Trattar, 6th, Rick Westphal, 7th, and Greg Morrow 8th, after coming from the D-main to the A-main!)

Our next race is July 5th for the Celebrate Freedom 600! All 6 classes will run a 100 lap A-main and it will be the return of the Figure 8 class! Pits open at 8am with racing starting at 10:30am! We hope you can make it out with us to enjoy some great dirt oval rc racing!!

For all rules and information, come check us out on Facebook at www.facebook.com/attitudercraceway, or on our website at www.attitudercraceway.com. We are also on www.rctech.net and www.dirtoval.com! You can also email us at attitude_raceway@hotmail.com! We hope to see all at the track!!!